Abstract of the article:

An autoimmune reaction directed against the cardiac b1-adrenergic receptor (beta1-ADR) leading to the generation of autoantibodies (AA) against this G-coupled receptor has been described in patients with heart failure (HF). Agonist-like beta1-ADR-AA are associated with morbidity in HF patients and even predict mortality. Standardised and valid diagnostic tools to detect beta 1-ADR-AA in clinical routine are lacking. We used a novel ELISA approach to investigate beta 1-ADR-AA in a cohort of 574 HF patients of the CIBIS-ELD trial with follow up. The CIBIS-ELD trial compared the titration of bisoprolol and carvedilol to recommended target doses in regard to BB tolerability in patients aged 65 years and older. Patient with left ventricular (LV) ejection fraction (EF) less than 50% or LV diameter end diastolic (DED) more than 55 cm showed significantly higher levels of beta1-ADR-AA. Although not yet fully validated, this ELISA allowed for a negative correlation of beta1-ADR-AA with the EF at baseline and at the follow up, beta1-ADR-AA further correlated positively with basal heart rate at follow up 12 weeks later. beta1-ADR-AA levels thus determined significantly increased under titration with beta-blockers (pless than 0.01). Changes in beta1-ADR-AA between F-Up and baseline were significantly higher in patients who used beta blockers (p=0.016) before study inclusion. The type of beta-blocker titrated in this study did not affect log beta1-ADR-AA levels at baseline (p=0.132), follow-up (p=0.058), nor the change (p=0.426). beta1-ADR-AA levels were estimated using a novel, commercially available ELISA. Although not yet fully validated, this ELISA allowed for pathophysiological insights: beta1-ADR-AA levels thus determined significantly increased under titration with beta-blockers (pless than 0.01), irrespective of type of BB. Higher levels of beta1-ADRAA at baseline are associated with higher heart rates, lower ejection fraction and enlarged left ventricles. The relevance of the beta1-ADR-AA biomarker should be further evaluated. 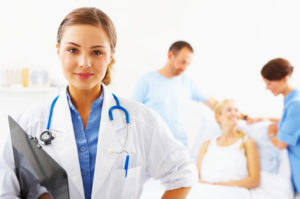